I love music because it is a powerful way to touch and move people.

Having gained a degree in jazz/modern music at the Conservatory of Amsterdam, Wiebke has played trumpet and flugelhorn professionally throughout her adult career. She has toured extensively through Europe and the USA in both theatre productions and a house dance trio.
Often performing to more than 2,000 people, she knows how to command a crowd. Having moved to Ibiza in 2014, Wiebke has become an extremely sought after musician. She regularly plays sessions for international recording artists visiting the island as well as being a permanent member of some of the island’s most successful groups.
BBC RADIO 1
CAFE MAMBO IBIZA
IMS LEGENDS DINNER
SPACE IBIZA

Wiebke is a multi-instrumentalist. She spent twelve years touring with a Dutch theatre production where she didn’t only play her trumpet and flugelhorn, but also sang backing vocals, played violin and keyboards.
Wiebke is very comfortable stepping into new situations and sight-reading music on the spot. She enjoys musical diversity and substituting in whichever band needed a stand-in.
Wiebke has professional training from the Conservatory of Amsterdam in jazz/modern trumpet. One of her stylistic trademarks has always been her ability to carry soulful, melodic solos.
Arranging was a large part of her training, so Wiebke is no stranger to writing music. She has written for many different kinds of instrumentations throughout her career. Such as, five piece horn sections, string quartets and wind bands.
Wiebke is very conscious of stage presence. During her twelve years performing in the Dutch theatres, choreography was an essential aspect to every performance. In addition to playing and singing, dancing and acting was also required skill. She has much experience moving and playing at the same time, and knows which choreographies work well in a horn section.

Looking for a professional performer?

Wiebke is not only a professionally trained trumpet-player, but also has more than fifteen years of experience performing in various theatres and on other big stages.
Lets talk 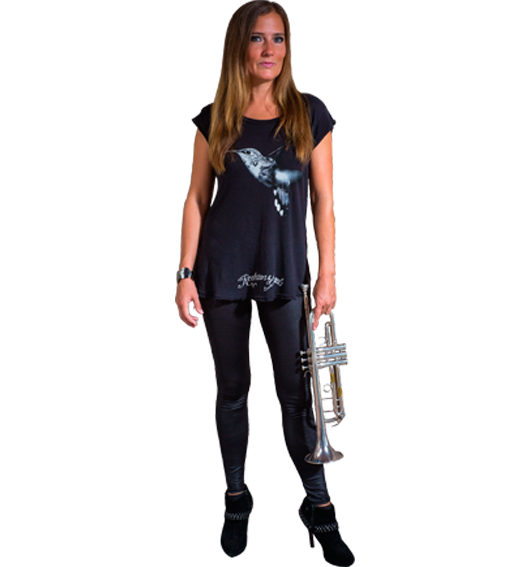 Having studied Jazz, my education has been focused on being creative: playing solos, interpreting melodies, writing music and arranging songs for all different kinds of instrumentations. But I am also creative in working with others, bouncing ideas off each other and solving problems.

Being on time for an appointment shows respect to the other people. I have worked with different kinds of musicians, and in many different places and cultures, where punctuality was sometimes not handled the same as in my home country Germany. Although I am easy to adapt to other customs, I still value punctuality highly and apply it to most of my life situations.

People like to work with me, because they can count on me to do my job well. With clear instructions and expectations, I prepare very well. And if I don’t have any information beforehand, that is no problem. I can easily find my way in new situations.

I am easy to work with

People enjoy working with me, because I am polite, helpful, analytical, efficient, professional, and bring a positive energy to the job. I like to focus on the work and the people around me, so we can create something professional and beautiful together.

I can easily adapt to new situations. In order to create a better result, modifications can be necessary. Sometimes there even need to be some last minute changes right before a performance. In those circumstances I manage to operate with a clear head and perform professionally.

I take my work seriously and am aware of the responsibility I have as a trumpet-player and performer. The trumpet is an instrument that sits on top of the band and therefore sticks out more than others. I make sure, I am in good shape and well rested to deliver a strong performance.

Wiebke is very talented and a hard worker!!

Wiebke is a highly talented multi-instrumentalist who has mastered the art of working with the upmost professionalism whilst staying grounded and easy going.

A musician of many talents, Wiebke is simply fantastic.

Wiebke is very creative and versatile. An awesome musician to work with.